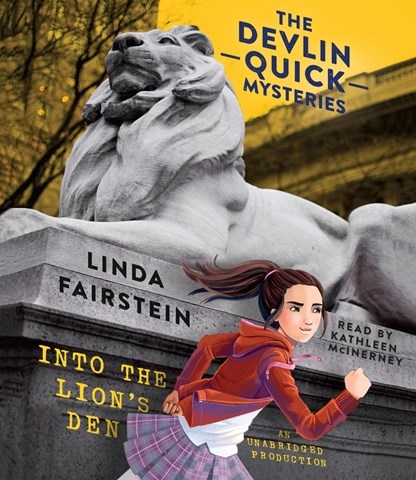 INTO THE LION'S DEN

Kathleen McInerney excels at the characters' New York and Brazilian accents as well as the picturesque descriptions of the New York City setting. Despite McInerney's accomplished narration, Fairstein's first mystery for kids is not fully successful--there are too many extraneous details, too much lucky happenstance, and not enough compelling mystery. While visiting the New York Public Library, Devlin Quick and a friend notice a man remove a map from the library's rare book collection. Listeners will enjoy hearing fascinating information about police work and libraries as the determined girls track down the thief. The secondary characters--such as Dev's aloof grandma, Lulu; Dev's mother; the police commissioner; and various police officers--are well portrayed, even while the predictable conclusion disappoints. S.G.B. © AudioFile 2016, Portland, Maine [Published: DECEMBER 2016]