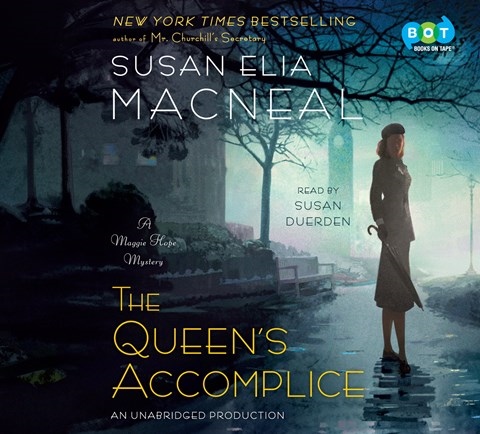 Narrator Susan Duerden artfully depicts wartime Britain and the indomitable Maggie Hope as she works in the war effort AND encounters the Blackout Beast--a Jack the Ripper-like killer. Vivid descriptions of the countryside and Nazi atrocities evoke a you-are-there feel in the ever-changing setting. Duerden's best creation is gutsy 85-year-old air raid warden Vera Baines, who discovers a body and then provides vital clues to what happened. Listeners will be saddened to hear that WWII heroines (and their families) received no compensation if they were injured or killed. It's also frustrating to hear how men viewed these brave women. Good portraits of "K" the cat and a belligerent drunk, along with Hope's thoughts, add to the listening pleasure. The wonderful conclusion features a commanding Queen Mother. S.G.B. © AudioFile 2016, Portland, Maine [Published: OCTOBER 2016]