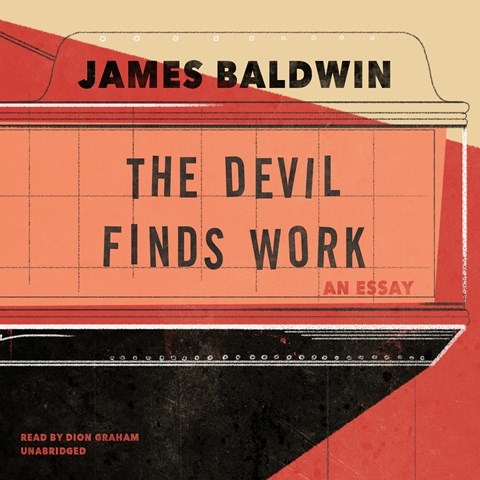 James Baldwin's 1976 discussion of movies bears little resemblance to a conventional movie review. Narrator Dion Graham easily adapts to Baldwin's wide-ranging analysis of race as presented in films and their literary sources, including a dispiriting experience adapting THE AUTOBIOGRAPHY OF MALCOLM X into a screenplay. Graham's hard-edged tone captures the author's anger at the unreal portrayals of blacks in movies of the period--GUESS WHO'S COMING TO DINNER and LADY SINGS THE BLUES, in particular. There are lighter moments, too. Graham's tone lifts for Baldwin's fond reminiscence of seeing Joan Crawford in the first movie he can remember--they shared bulging eyes! A surprise choice for scrutiny is THE EXORCIST. Baldwin loathes it, and his disdain drips at the stark contrast between black and white conceptions of evil and the devil. A.B. © AudioFile 2017, Portland, Maine [Published: OCTOBER 2017]