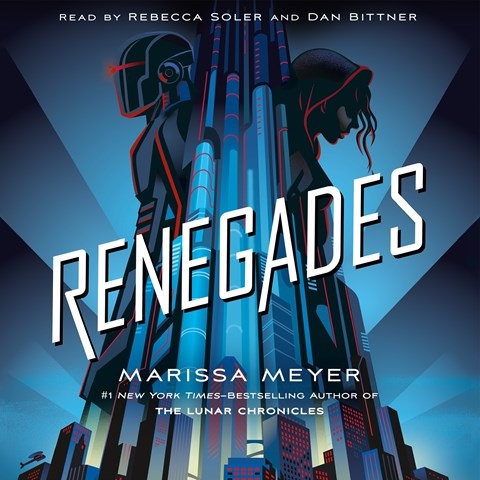 Teens on opposite sides of a long-running feud between the Renegades and the Anarchists, two very different groups of superheroes, find themselves caught in the middle. When Anarchist Nova Artino infiltrates the Renegades by posing as a recruit, she connects with Adrian Everhart, the adopted son of Renegade leaders who is hiding secrets of his own. Rebecca Soler voices the chapters from Nova's point of view; Dan Bittner reads Adrian's chapters. Both narrators bring authenticity to the young characters, but substantially different interpretations of some secondary characters can make them seem inconsistent. Bittner also struggles to create natural-sounding female voices. Still, for Meyer's (The Lunar Chronicles) many fans, this fun and surprisingly thoughtful superhero tale will be a rewarding listen. E.C. © AudioFile 2017, Portland, Maine [Published: DECEMBER 2017]