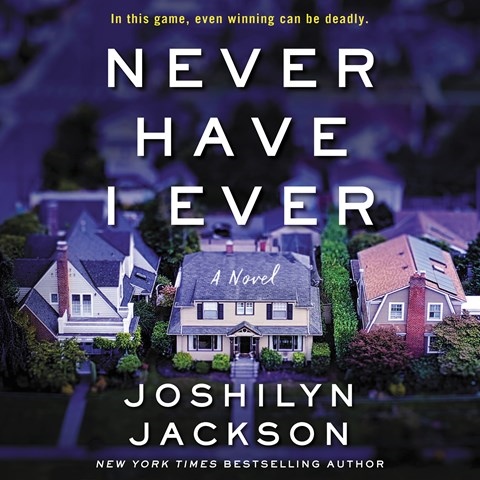 NEVER HAVE I EVER

In a contemporary thriller expertly narrated by the author, suburban mom Amy is in a battle to keep her deepest, darkest secret. When a newcomer to the neighborhood blackmails her about a tragedy she caused as a teenager, Amy will do anything to keep her secret from destroying the life she has built. Joshilyn Jackson's skills as an author are rivaled by her talents as a narrator. Jackson sets the story in a Florida Panhandle community, and she delivers the appropriate accents. From beginning to end, she breathes life into her characters, vocally representing the wide range of emotions found in this rollercoaster of a story. Intense scenes cause one to listen with breathless anticipation. Jackson provides yet another performance sure to thrill listeners. A.L.S.M. © AudioFile 2019, Portland, Maine [Published: AUGUST 2019]