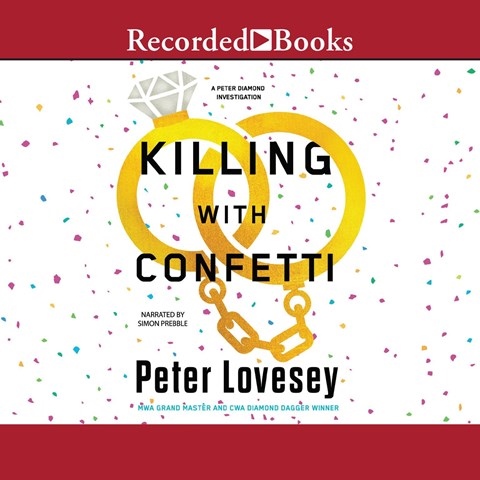 Author Peter Lovesey is the quintessential master of the English detective story, and narrator Simon Prebble is the epitome of a great English storytelling voice. He portrays Detective Superintendent Peter Diamond, the protagonist of 17 earlier adventures in this series, as warm, intuitive, analytical, and occasionally cantankerous. There is a trace of gruffness in Prebble's portrayal of Diamond, and his accent lacks the upper-class refinement that Prebble gives to his boss Deputy Chief Constable George Brace's speech. Brace's son is marrying a crime lord's daughter in a spectacular wedding in Bath, but the father fears an assassination attempt by his enemies. Reluctantly, Diamond is assigned as bodyguard. Fatal shots are fired--but not in the way expected. Good listening. D.L.G. © AudioFile 2019, Portland, Maine [Published: AUGUST 2019]