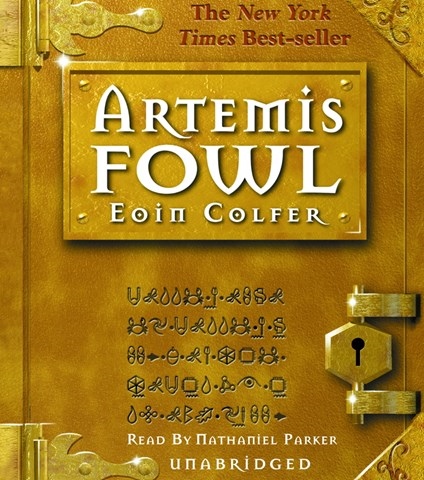 [Editor’s Note: This is a combined review with THE ARCTIC INCIDENT and THE ETERNITY CODE.]--Colfer’s series features two complex societies: the wealthy, if felonious, above-ground world of the human Fowl family and the elaborate, technologically advanced underground world of the fairies. Artemis Fowl, the 12-year-old scion of a famous Irish crime family, sets out to restore the ancestral fortunes depleted by his father’s supposed death at the hands of the Russian mafia. The young criminal mastermind’s plan rests on the kidnap and ransom of a fairy. The ransom demanded will be fairy gold. Into this world of adventure, corruption, and extraordinary technology comes narrator Nathaniel Parker, who has a distinct voice for everyone--from the young Master Fowl to the kidnapped LEPrecon (Lower Elements Police) Captain Holly Short and the astonishing computer genius of the fairy world, the centaur Foaly. Parker creates a complete pantheon of accents and pacing to complement Colfer’s worlds. The sequels, in which Artemis--strangely developing what appears to be a conscience--invokes the help of the fairies to save his father (THE ARCTIC INCIDENT) and to rescue both the humans and fairies from the evil Jon Spiro (THE ETERNITY CODE) maintain the impeccable voicing and pacing developed in the first book. The recurring characters are instantly recognizable from one book to the next, encouraging the listener to suspend disbelief and become completely immersed in the escapades, often laced with humor, of Artemis and his various companions. While the pronunciation the Vietnamese surname “Nguyen” may startle some listeners, and the 1940s-style Asian accent is somewhat stereotypical, this does nothing to diminish the rip-roaring adventure. Parker’s splendid narration should lead to family listening that might just encourage discussion of truth, friendship, and loyalty. S.G. Winner of AudioFile Earphones Award © AudioFile 2004, Portland, Maine [Published: DEC 04/ JAN 05]