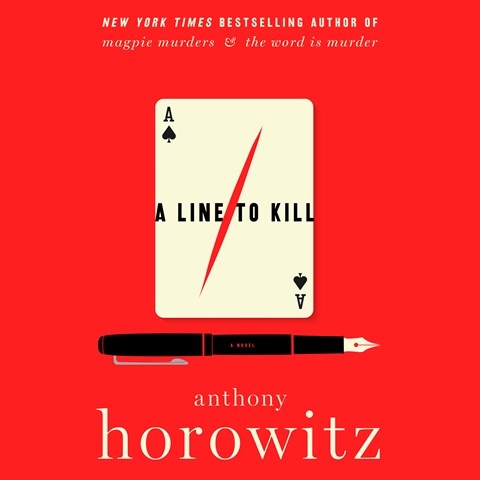 A LINE TO KILL Hawthorne and Horowitz, Book 3

Deep-voiced narrator Rory Kinnear hits the performance sweet spot for this mystery, which doesn't take itself all that seriously. Former Scotland Yard Detective Inspector Daniel Hawthorne and his sidekick scribe, Anthony Horowitz, are invited to a literary festival on the quiet English Channel island of Alderney, where murder ensues. Kinnear perfectly captures Horowitz's envy-tinged annoyance at Hawthorne's celebrity, ability, and reluctance to expound on his methods. There are plenty of well-played suspects (a chef, a children's author, and a blind "seer" among them), well-placed red herrings, and well-played bits of humor. There is also a controversial power line. This is the third audiobook in the Hawthorne/Horowitz series, but this one works as a stand-alone as well. An entertaining listen. G.S. © AudioFile 2021, Portland, Maine [Published: NOVEMBER 2021]