Home»Reviews»THE HITCHHIKER’S GUIDE TO THE GALAXY 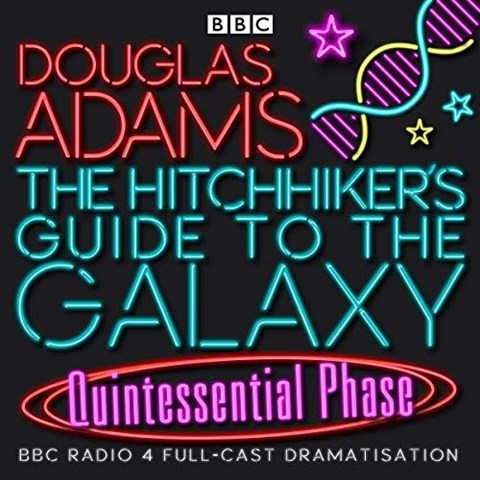 THE HITCHHIKER’S GUIDE TO THE GALAXY Quintessential Phase

by Douglas Adams | Read by Simon Jones, Geoffrey McGivern, and a Full Cast

This final installment of Douglas Adams’s offbeat radio drama about hitchhiker Arthur Dent reunites the cast from the original BBC production. They may be--eek!--25 years older, but happily they’re none the wiser. Arthur Dent, played as ever by Simon Jones, is searching several galaxies for his lost love, but that won’t help you follow the plot. Instead, revel in the intentionally clunky sound effects and admire the cast’s ability to pronounce things like “Stavrolmula Beta,” the name of a very nasty planet. Through the magic of digital technology, the production includes the late Douglas Adams in the voice of an unhinged creature named Agrajag. This production will make you grin from beginning to end. A.C.S. 2007 Audies Award Winner © AudioFile 2006, Portland, Maine [Published: OCT/ NOV 06]