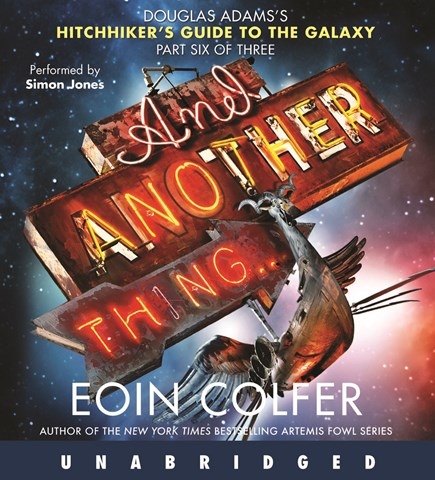 AND ANOTHER THING . . . The Hitchhiker's Guide to the Galaxy, Book 6

This is a title for people who wish they could hit the reset button and hear more from THE HITCHHIKER’S GUIDE TO THE GALAXY. Writer Eoin Colfer does just that, picking up the story from the late Douglas Adams and continuing the bizarre, irreverent adventures of Ford Prefect, Arthur Dent, Zaphod Beeblebrox, and Thor, the Thunder God. Narrator Simon Jones (who played Dent in the BBC series) has to imitate not only humans from different cultures but also aliens, machines, insects, and talking cows with a death wish. And he makes it sound easy. While some may be critical of Colfer's attempt to bottle lightning and continue the hitchhiker saga, the result is a solid story that keeps the dream alive—in all its strangeness. M.S. © AudioFile 2009, Portland, Maine [Published: NOVEMBER 2009]