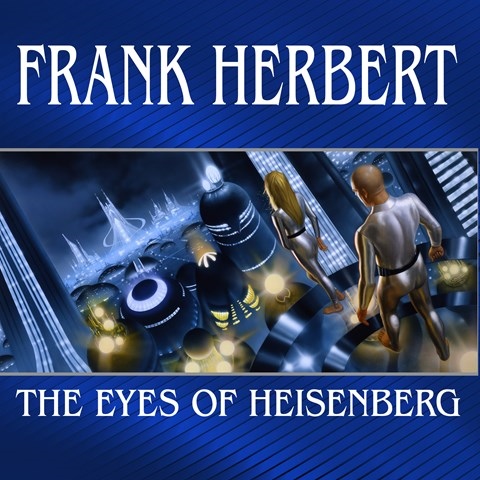 THE EYES OF HEISENBERG

In the future, humanity is ruled by a small group of human immortals known as Optimen, who have lived for tens of thousands of years and regulated every aspect of life and health. Award-winning DUNE narrator Scott Brick perfectly captures this grim look at a world shaped by genetic engineering, in which the regime of the Optimen is opposed by a group of humans supporting natural birth, as well as by a mysterious outside force. Brick skillfully emphasizes Herbert’s favorite themes of ritualized behaviors, secret languages, and the prolongation of life. This book was written a year after Herbert wrote his first Dune novel in 1965. Although the ending is rather abrupt, Herbert fans will enjoy this audio experience. B.C.E. © AudioFile 2010, Portland, Maine [Published: DECEMBER 2010]