Home»Reviews»THE ASK AND THE ANSWER 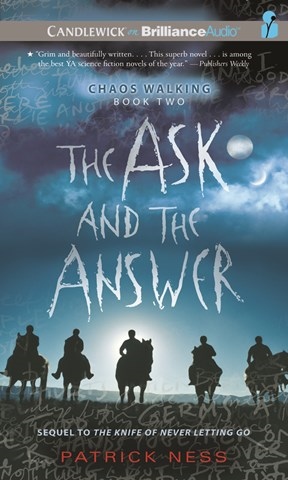 THE ASK AND THE ANSWER Chaos Walking, Book 2

The narration of this stunning dystopian tale by Nick Podehl and Angela Dawe can only be described as outstanding. The second installment of Ness’s trilogy finds 13-year-old New World colonist Todd Hewitt and his friend, settler Viola Eade, at the mercy of self-proclaimed and manipulative President Prentiss. Together they must fight for their freedom and the preservation of the New World, but to do this, they need to find each other and then attempt to contact Viola’s fellow settlers. Nick Podehl gives a pitch-perfect portrayal of the confused and fierce Todd; Angela Dawe portrays the frightened but determined Viola. Together, their performances create a stellar listening experience. K.O. Winner of AudioFile Earphones Award © AudioFile 2011, Portland, Maine [Published: JANUARY 2011]