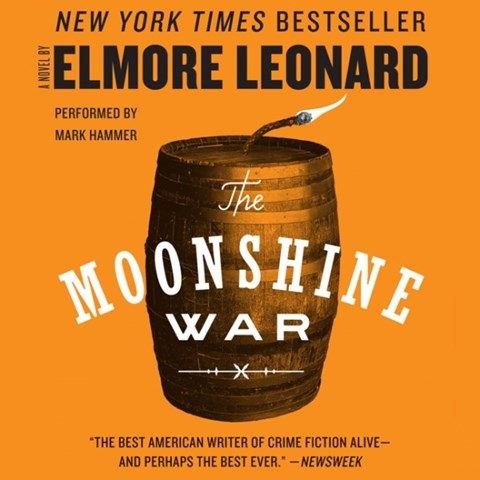 Narrator Mark Hammer sets the scene using a gravelly voice and an Ozark drawl for this rerelease of an early Leonard novel. During Prohibition, some mountain men in eastern Kentucky are making a living selling moonshine whiskey. They become the targets of federal agents, who can’t ignore all that money. Hammer makes the well-armed distillers fit their roles as vicious, erratic, and stupid. The mistrust among them sparks an implosion as 150 barrels of the finest aged corn liquor remain hidden by one greedy rat in the woodpile. Hammer’s greatest contribution comes from the lethargy he portrays as the men plot while partaking of their best product, sipped from dirty Mason jars. He maximizes the impact of the hayseed vocabulary and hillbilly comments, which seem to take forever. J.A.H. © AudioFile 2010, Portland, Maine [Published: DECEMBER 2010]