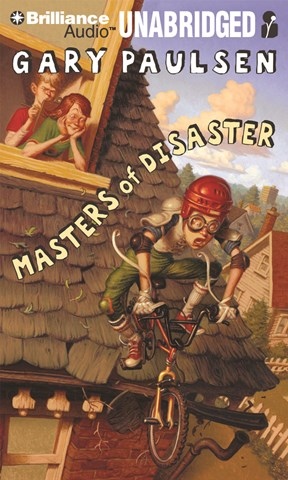 Author Gary Paulsen personally introduces narrator Nick Podehl as a “trained professional who won’t ruin the recording by laughing.” His introduction is right on target: Podehl maximizes the story’s humor without cracking himself up as he portrays three 12-year-olds who are embarking on "dangerous missions." Podehl shows the confidence of mastermind Henry, the nerdiness of scientific Riley, and the fear of naïve Reed, who’s duped into performing all the deeds. Podehl builds Reed’s terror, for example, as the boy prepares to ride his bicycle off a third-story roof—he stutters and then breaks into full-blown horror before he emerges dazed, confused, and smelly from landing in a pile of dirty diapers. Podehl excels at the breakneck speed of all the breakneck adventures. S.W. Winner of AudioFile Earphones Award © AudioFile 2011, Portland, Maine [Published: APRIL 2011]