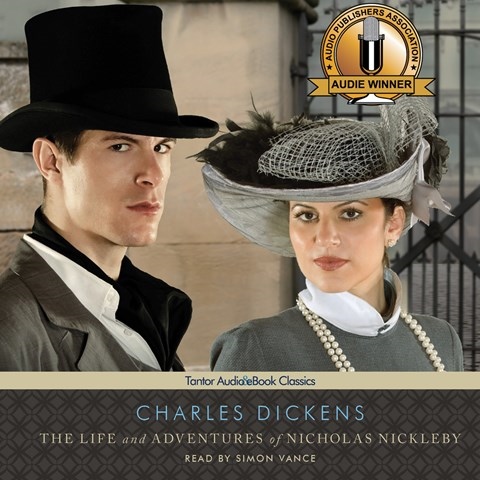 THE LIFE AND ADVENTURES OF NICHOLAS NICKLEBY

As is typical of Charles Dickens, NICHOLAS NICKLEBY contains a myriad of characters, and as is typical of Simon Vance, he skillfully handles each one. In an epic listen, Vance's smooth, pleasant voice regales listeners with the title character's search for his place in the world after the death of his father. Capturing the essence of characters ranging from noblemen to country folk, the seasoned narrator appropriately injects his voice with smugness, innocence, and everything in between. The pacing is perfect—Vance rapidly delivers Mrs. Nickleby's comedic ramblings and slows his speech to a crawl when portraying the simple Smike. His female voices are particularly noteworthy, sounding soft and natural. Like the novel itself, Vance delivers a performance that is both poignant and humorous. M.D. 2012 Audies Winner © AudioFile 2012, Portland, Maine [Published: JULY 2012]