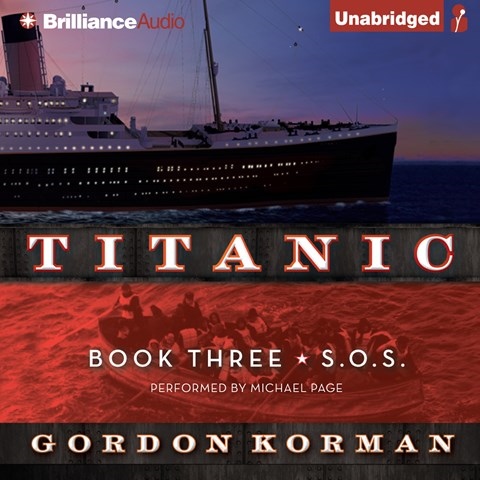 The final installment of Gordon Korman’s TITANIC trilogy does not disappoint. Michael Page continues his animated, fast-paced narration by ramping up the tension and confusion of the TITANIC’s final few hours. The four teens who are thrown together in the first two books find themselves fighting for their lives and the lives of their fellow passengers, as the “unsinkable” luxury liner does just that. Page delivers on a multitude of levels—the nonchalance of the first-class passengers who refuse to believe the ship is going down, the lack of response from a nearby ship, and the incredulity of the crew of the eventual rescue ship. His vocals border on the frenetic as the inevitable becomes a reality, and life changes forever for Paddy, Sophie, Juliana, and Alfie. E.A.B. © AudioFile 2012, Portland, Maine [Published: MARCH 2012]