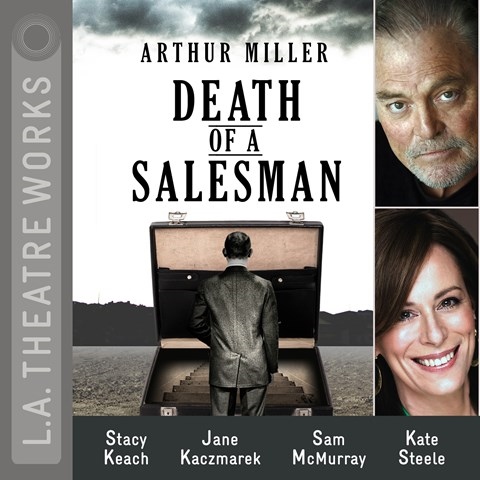 DEATH OF A SALESMAN

by Arthur Miller | Read by Stacy Keach, Jane Kaczmarek, and a Full Cast

Stacy Keach portrays the quintessential traveling salesman, Willy Loman, who has endured the pressures of years on the road to support his family and is now coming to the realization that some of his most precious dreams will never be achieved. As his family relationships unravel, the cast, performing before a live audience, delivers the highs and lows of dysfunction, heartbreak, selfish motives, depression, and compassion—all of it coming to a riveting peak in what many consider to be the greatest play in American drama. Jane Kaczmarek is outstanding as Willy’s wife, his rock who has turned a blind eye to just how he managed to get through the doors of so many important buyers in his younger years. The audio quality is perfection and simulates a front-row seat right in the listener’s headphones. B.J.P. Winner of AudioFile Earphones Award © AudioFile 2012, Portland, Maine [Published: FEBRUARY 2012]