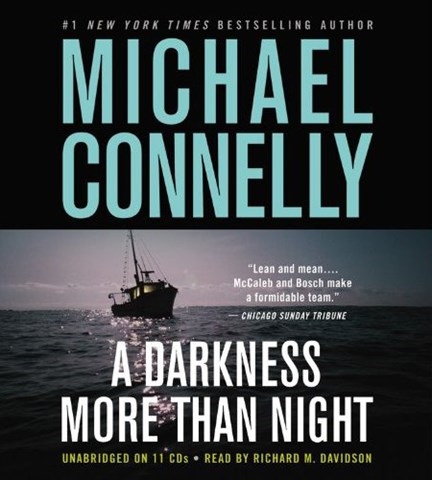 A DARKNESS MORE THAN NIGHT

It takes a special performer to do justice to Connelly’s thrillers because of his complex character development and psychological bent. In Connelly’s latest work, the reader’s task is formidable because Connelly brings his two characters, Harry Bosch and Terry McCaleb, together for a blockbuster. While L.A. Police Detective Bosch, a compulsive, one-of-a-kind investigator, is officer-in-charge of a trial for a Hollywood director accused of murdering a starlet, McCaleb, retired from the FBI, is asked to profile a ritualistic murder of a man Bosch suspects of killing a prostitute. As the cases merge, the listener is treated to lessons in trial procedure, forensics, psychological motivation, and even fifteenth-century art and painters. To Richard M. Davidson’s credit, the listener can really picture the gravelly voiced Bosch as he interplays with the more mild-mannered McCaleb. The trial sequences are especially interesting because Davidson is called upon to portray a multiplicity of characters in tandem. This reviewer was captivated by the content and performance, listening long into the night. A.L.H. © AudioFile 2001, Portland, Maine [Published: APR/MAY 01]