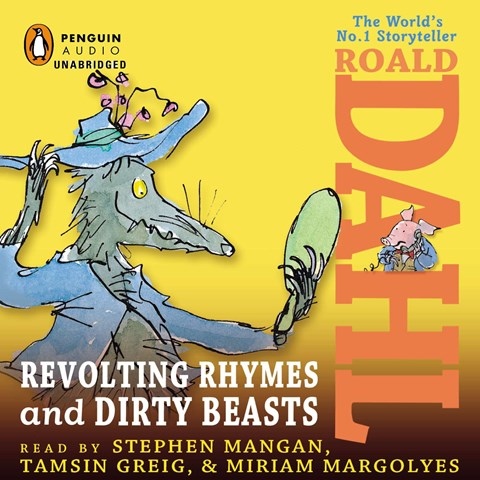 Stephen Mangan, Tamsin Greig, and Miriam Margolyes deliver this collection of poetry with the same wit and verve Dahl put into his words. Half the poems are fractured fairy tales, and the other half are about animals, like the one in which a boy is eaten by his pet anteater. Margolyes's performances stand out. The nasally, whiny voices she uses in Dahl's retelling of "Cinderella"--in which Cinderella winds up with a jam maker--are perfect, and she moves deftly between dialogue and narration, never missing a poetic beat. Greig and Mangan are also strong performers, bringing a sense of silly fun to their readings. Brassy transitional music completes this crowd-pleaser. A.F. © AudioFile 2014, Portland, Maine [Published: JANUARY 2014]