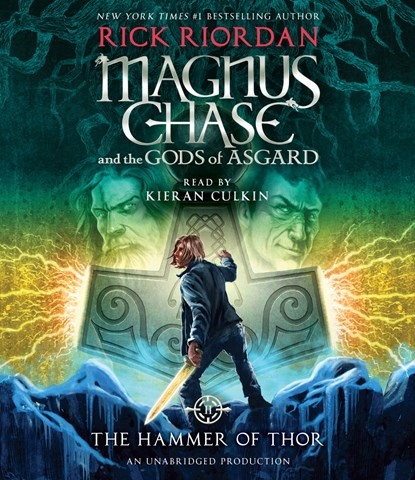 THE HAMMER OF THOR Magnus Chase and the Gods of Asgard, Book 2

In the second book of Riordan's newest series, narrator Kieran Culkin focuses on capturing the often befuddled voice of Magnus, a demigod whose father is the Norse god Frey. Culkin heightens the story's humor and dives into the action as Magnus and his friends seek to retrieve Thor's lost hammer and prevent Loki from marrying off his daughter to a giant. Culkin doesn't create distinct voices for each member of the large cast of characters, so listeners may occasionally lose track of who's speaking. However, the majority of listeners, especially fans of the series, will care most about Magnus himself, whose kind and self-deprecating nature shines through. This blend of fantasy and realistic fiction is another crowd-pleaser. A.F. © AudioFile 2016, Portland, Maine [Published: DECEMBER 2016]