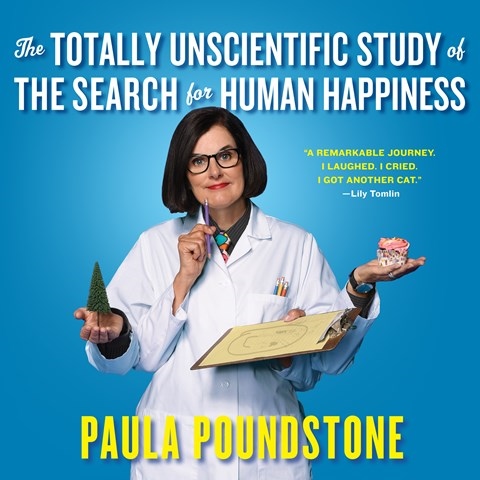 THE TOTALLY UNSCIENTIFIC STUDY OF THE SEARCH FOR HUMAN HAPPINESS

Comedian Paula Poundstone wanted to know if there's a secret to happiness, so she became the test subject of her totally unscientific research. Listeners are the beneficiaries. In each chapter, she tests a new hypothesis for happiness, starting with getting fit with taekwondo and moving to camping with her daughter, dancing, and spending more time with her family. Along with scientific-sounding evaluations and analyses comes the wisdom, laced with her canny observations and sparkling wit, and delivered in her trademark deadpan tone. For instance, did you know that cello hours are longer than computer hours? And she loves to read to her kids but thinks it's better to have an audiobook on when she's driving. Thank you, Paula, for going through all that tedious research. I feel much happier after listening. S.J.H. Winner of AudioFile Earphones Award © AudioFile 2017, Portland, Maine [Published: JUNE 2017]