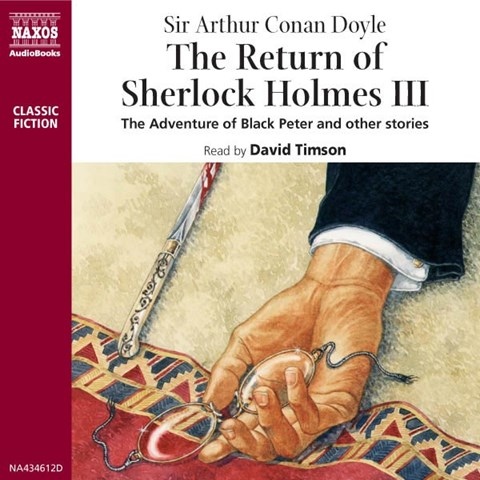 THE RETURN OF SHERLOCK HOLMES III

In this excellent production, David Timson performs the five stories with flair. Timson’s voice transports listeners from the first baffling case to the last--from London’s 221B Baker Street to rural Sussex, where a seaman’s body is found harpooned to a wall in “The Adventure of Black Peter,” to the highest echelons of the British government in “The Adventure of the Second Stain,” in which a missing secret document could lead to war. The stories, first published in The Strand magazine between 1903 and 1904, feature Holmes’s protégé, Inspector Stanley Hopkins, as well as the ever-faithful Dr. Watson. The CD offers helpful notes by Timson, careful tracking information, and nonintrusive classical music as mood-setting introductions to the stories. This is top-notch audio. S.J.H. Winner of AudioFile Earphones Award © AudioFile 2006, Portland, Maine [Published: APR/ MAY 06]