Home»Reviews»THINGS I WANT TO PUNCH IN THE FACE 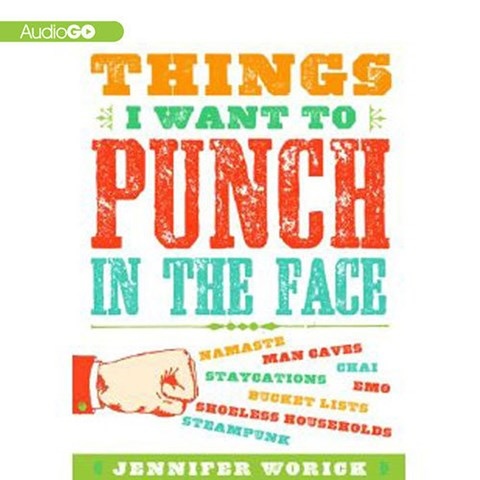 THINGS I WANT TO PUNCH IN THE FACE

Based on the popular blog of the same name, this audiobook features Jennifer Worick's rants against everything from old guys with ponytails to people who don't believe in television. The premise is simple: "Crap that chaps my hide." Narrator Rebecca Gibel injects a bit of venom into each of the selections, which are given a ranking (number of punches) based on how annoying they are to the author. Gibel definitely manages to communicate both the author's irritation and her humor, but the long list of punch-worthy items from the blog starts to feel tiresome after a while, and the entries start to blend together. Nonetheless, listeners will certainly chuckle in recognition at some of Worick's cannily described annoyances of modern-day life. S.E.G. © AudioFile 2013, Portland, Maine [Published: APRIL 2013]