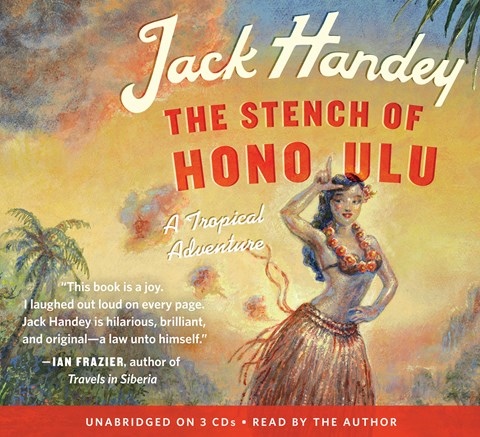 THE STENCH OF HONOLULU A Tropical Adventure

At first, Jack Handey's Forrest Gump-like reading of his book, which is not about any Honolulu on this planet, is perplexing; then the listener gets the joke. Jack Handey, right. He's the same Jack Handey whose “Deep Thoughts” segments delighted viewers of “Saturday Night Live” during the 1990s. So Handey deliberately performs his novel with the slow and silly style of a narrator who seems constantly amazed about what he's saying. The “hero” of the book is a disaster. He's a little mean-spirited as he searches Hawaii for a golden monkey, but most of his problems are caused by a Three Stooges level of stupidity. The listener is in on the gag as Handey narrates his adventures in sleepy, singsong style—as if he's telling the story to someone he met on a park bench. “Deep Thoughts” meet silly stories. M.S. 2014 Audies Finalist © AudioFile 2014, Portland, Maine [Published: APRIL 2014]