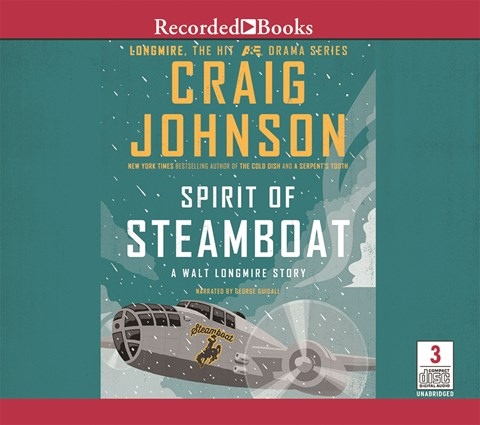 George Guidall’s narration is impeccable in this Walt Longmire novella, which flashes back to Christmas Eve 1988. A critically burned child needs a life flight from Wyoming to Denver, but a terrible snowstorm has made the trip impossible. Guidall is perfect as Longmire, the newly elected sheriff who is determined to save the girl. Guidall’s voice is especially fitting for the cantankerous retired sheriff, Lucian Connally, who decides to fly the girl and crew on a dilapidated bomber, called Steamboat, which he flew during WWII. Guidall renders Connally as an irritating, drunk, yet likable and humorous character. Guidall’s pacing brings out the intense excitement as the crew encounters one disaster after another during the harrowing and miraculous flight. M.M.G. Winner of AudioFile Earphones Award © AudioFile 2014, Portland, Maine [Published: FEBRUARY 2014]