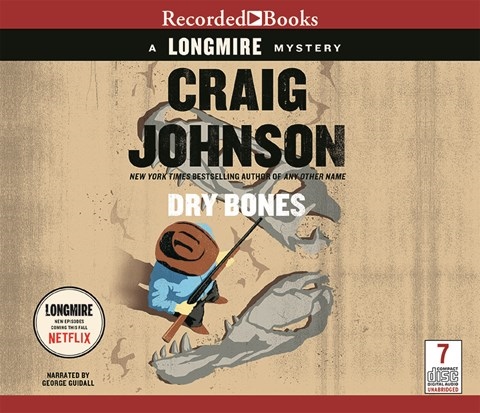 George Guidall just gets better and better as the gruff, dependable Sheriff in the 11th Walt Longmire mystery. Johnson’s intricate plot has Walt and his undersheriff, Vic, trying to figure out what caused the death of Danny Lone Elk. Then there’s the $8-million dinosaur fossil found on Lone Elk’s property. The scientists who excavated the skull and named it Jen want it for research, and the U.S. attorney wants it for Wyoming, while the Lone Elk family want Jen for the Cheyenne Nation. Guidall’s interpretations of Longmire and the denizens of Absaroka County conjure emotions ranging from anger to warmth and from jealousy to friendship. When Walt’s daughter and granddaughter visit and bittersweet conflicts arise, Guidall is so genuine he’s almost invisible. First-rate listening. S.J.H. Winner of AudioFile Earphones Award © AudioFile 2015, Portland, Maine [Published: MAY 2015]